It is well known that Cyprus investment program is very popular among wealthy people around the world who choose it as a path to the EU citizenship. In taking their decision to invest, they are guided by a number of factors, including tax consequences, return on investment, economic and legal indicators and many other details, which we shall cover in our next articles. However, according to recent studies, financial advantages are not the main factor when choosing a country.

Having analyzed the factors that influence the billionaires when they decide on the countries of citizenship, the economists came to the conclusion that the world’s richest prefer security and low inequality level over tax benefits.

Super-wealthy entrepreneurs, when choosing a country of citizenship, are guided mainly not by economic factors but by a high level of security, low corruption and inequality. Such estimates obtained during the modelling using regression analysis are covered in the research published by Vladimir Popov, the main researcher of the Central Economics and Mathematics Institute of the Russian Academy of Sciences, director of scientific research of the Research Institute “Dialogue of Civilizations”.

It would have been logical to expect that billionaires willingly accept citizenship of countries with low or zero taxes, but as it turned out, it is safety and quality of life that play the most important role, even if taxes in the country are high. It makes sense to assume that wealth allows them to hire professionals who, due to loopholes in legislation, can provide low or zero taxes for their client.

Other researchers come to similar conclusions. Andres Solimano, professor of economics at the Massachusetts Institute of Technology, in his “Mobility of Wealth: Prerequisites for Inequality” points to a weak link between personal income tax and offshore funds, referring to the insignificant amount of funds held in offshore countries by residents of high-tax countries, for example, Scandinavia. Regression analysis shows that billionaires tend to choose the happiest countries - ones with the highest quality of life. At the top of the World Happiness Rating, published by the United Nations, in recent years there are Scandinavian countries (Denmark, Norway and Sweden), as well as Finland, Iceland, the Netherlands, Canada, Australia, New Zealand and Israel.

Surely you already know, but if you haven’t, we are happy to inform you that Cyprus is considered the safest country in Europe, the safest among small countries in the world and the 5th among all countries of the world (Value Penguin).

And Sotheby's International Realty experts unanimously agree that Cyprus is one of the happiest countries in the world! 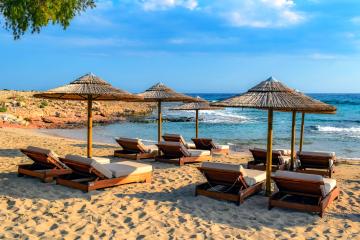